Planned Parenthood can’t stand it when pro-lifers turn up at their swanky fundraisers and expose their true agenda. And the text message here proves it. 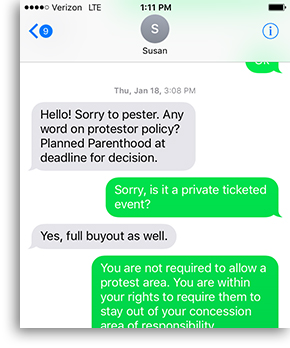 Here we see solid evidence—obtained through the Freedom of Information Act—of Planned Parenthood trying to stop a Pro-Life Action League protest this spring.

Of course, they won’t succeed. The protest will go forward, as will hundreds of others organized by the League throughout the country this year.

Join the team that’s keeping Planned Parenthood on the run!

Use the form below to make your tax-deductible gift in support of the Pro-Life Action League’s year-long protest campaign against Planned Parenthood: