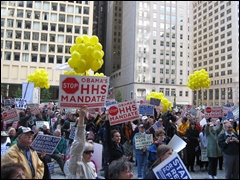 Stand Up for Religious Freedom Rally in Chicago, Oct 20 [Photo by Matt Yonke]

The Pro-Life Action League’s historic grassroots protest of President Obama’s HHS Mandate continued this fall with another nationwide “Stand Up for Religious Freedom” rally, held in over 140 cities and towns across the United States on October 20.

The League shipped 24,000 signs to Rally Captains from Maine to Hawaii, including a new sign design reading Vote for Life and Liberty.

Catholic Couple Refuses to Violate Their Faith on Obama’s Orders

The most personal testimony against the HHS Mandate came from speakers Chris and Mary Anne Yep, employers who are suing the federal government over the HHS Mandate. Their business, Triune Health Group, was ranked the number one best place for women to work by Crain’s Chicago Business, largely because of their generous health plan. But that’s not good enough for Barack Obama, whose HHS Mandate would force these devout Catholics to violate their faith by providing contraceptives and abortion-inducing drugs to their employees.

The Chicago Stand Up Rally was well covered by the local media outlets, including a feature segment on WBEZ, the Chicago National Public Radio affiliate, on the changing nature of the Catholic vote.

A tiny group of counter-protesters served only to bolster the pro-life crowd’s enthusiasm.

Ready to Fight on in Obama’s Second Term

Similar success was reported by Rally Captains across the country, who also expressed the great gratitude to the League for organizing this yearlong series of protests against this unprecedented attack on religious freedom.

In all, the League organized 450 individual rallies in more than 200 cities with attendance topping 150,000, making this the single largest series of pro-life demonstrations in U.S. history. Moreover, the League is now plugged into a vast network of committed local activists who are ready to continue fighting for religious freedom and the sanctity of life during President Obama’s second term.