The TeenSpeak 2009 Essay Contest question was: How would you convince a pro-life friend to become more actively involved in the fight against abortion? And the winner of the $1,000.00 scholarship? Ava Voissem. Have a read. It think you’ll agree she did a splendid job. Congratulations, Ava! Second place, a $500.00 scholarship, went to Theresa Simeo. Her essay follows Ava’s. Well done, Theresa! 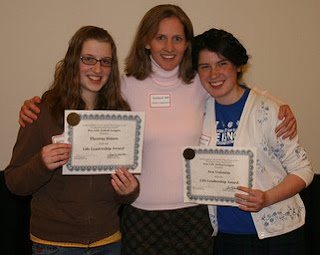 How would you convince a pro-life friend to become more actively involved in the fight against abortion?

I would convince a prolife friend to become more actively involved in the fight against abortion by doing three things: invite, urge, and act. Personal experience has taught me that those 3 things go hand in hand, and work! First and foremost I would invite my prolife friend to come with me to prolife events. I know from personal experience that many people are informed of events, but usually donâ€™t give them a second thought, unless theyâ€™re involved with the organization or the event. By asking my friend to come with me, I inform her that I will be going and usually that I can offer some mode of transportation, which offers the impetus to be present. Next, despite how fun an experience would be or how genuinely interested my friend may be, chances are she still wonâ€™t attend because sheâ€™s just too busy. For this reason, I believe itâ€™s prudent to truly introduce her to the urgency of taking a more active stand in the prolife movement. Abortion kills a baby every 26 seconds; thatâ€™s not a pitch, itâ€™s a fact. According to the Guttmacher Institute, 1,210,000 babies die every year in the US through induced abortion. This means that every day 3,315 babies die, and every 30 seconds an innocent baby dies against Godâ€™s will. Besides being urgent, there is no other cause that is as worthy as protecting and defending Godâ€™s most precious beings, the innocent children. Just like itâ€™s more opportune to wait until your father has eaten a good dinner and is sitting comfortably in his chair before asking him for the car keys, itâ€™s usually best to approach someone (especially a friend) about doing more for the cause, when sheâ€™s all fired up, raring to go help (such as after a motivational prolife event) and just waiting for an opportunity to show itself. Many people already know that abortion is wrong but arenâ€™t aware of what they can do to stop it. I would recommend doing something truly active and demanding such as picketing, protesting and/or praying outside of an abortion clinic. The average teenager isnâ€™t initially interested in baking cookies and cutting out cards, regardless if itâ€™s for a good cause, as such activities are viewed as a waste of her time. We like a challenge, and we love to be active! Most people tend to be a bit rebellious when theyâ€™re teens. Itâ€™s natural for a new emerging individual to want to be known as a separate person and to not want to conform to society. This â€˜emergenceâ€™ can be good when the spirit is channeled in the right direction; and what better thing is there to rebel against, than the lies promulgated by the pro abortion movement? What is most â€˜counterculturalâ€™, and if I may add â€˜hipâ€™, is to be prolife! Some people may claim itâ€™s just a phase, but thatâ€™s not true! Phases, whims, and fads are short-lived and almost always devoid of sentiment. To my belief, the prolife cause has shown to be the largest (and growing) group of people inspired by the Truth and wanting to help further it and thereby help others. This is especially evident in the prolife movement, where the majority of activists are youth and young adults! Lastly, I would further encourage my friends by speaking frankly. We most probably will suffer persecution, as did the early Christians, but nothing worth having comes easily and look at the fruits of their suffering. More and more people converted to Christianity, it spread like wildfire all around the world, and the same may be said for the prolife movement! No matter how the media boycotts our efforts or they seem to go unnoticed, we always have hope! The Truth is on our side, therefore God is on our side, and the truth always prevails in the end! We are young, naÃ¯ve, hopeful, idealistic, inspired, and motivated; we feel as though we have the world in the palm of our hands, and so we have! It is our responsibility to convert the world to live and promote the Truth one person at a time!

How would you convince a pro-life friend to become more actively involved in the fight against abortion?

Hey Elena, I know weâ€™ve been talking at youth group about Pro-Life things that we could do, either by ourselves or with the whole youth group. Iâ€™ve been thinking and praying about some ideas and this is what I came up with: First of all it is so AWESOME that you and Mandy are starting a pro-life group at St. Michael’s! I will definitely come to the planning meeting and be working along side you in starting it. Of course you can still keep coming to our Apostles for Life meetings! We try to have educational life topics to inform our members on everything from pro-life legislation to fetal development. If you canâ€™t make the meetings but would like to learn more about your pro-life beliefs, I would suggest these websites: generationsforlife.org, abort73.com, familiesagainstplannedparenthood.com. Oh, and ProLifeWorld.com has some pretty awesome t-shirts! With Apostles for Life we also have our monthly prayer witness when we pray for an hour outside the local abortion clinic. I know your parents might have problems with you praying there, but it is really peaceful and prayerful. Iâ€™ve never been yelled at by the clinic workers, scolded by policemen or anything like that. We hold a sign that reads: Pregnant? Need help? 1-800-848-LOVE. Sometimes it can be frustrating when you see all these girls going in. However, last time we were there, one girl left, and all those months out there were really worth it. I would also love to plan with you and Mandy about going to the March for Life next year. I know you were interested in going and some of my friends have gone and loved it! Last year I went to a rally called the â€œYouth for Truthâ€ Rally at the Planned Parenthood building in Aurora and it was amazing. There were over 500 teens, most of them in lime green t-shirts that read â€œYouth for Truthâ€ and â€œChoose Lifeâ€, protesting Planned Parenthood and holding Pro-Life signs. It energized me so much and after that I really dove into the Pro-Life movement and made the decision myself to be actively involved in as many Pro-Life events as possible. If I got excited to be with 500 pro-life teens can you imagine what it would be like to be with THOUSANDS of pro-life teens! Another thing we can do, possibly as a club, is help Womenâ€™s Choice Services in Lombard. In case you didnâ€™t know, Womenâ€™s Choice Services is a Crisis Pregnancy Center that provides free services such as pregnancy tests, ultrasounds, and counseling to girls and women in difficult situations. I recently talked to a woman who works there after I dropped off some baby items that we bought. She said that they really need a regular income instead of seasonal gifts or one time donations. Maybe we could design some sort of pledge card asking people for monthly donations and pass then out at church. They also asked us to help with their mailing list and assemble their fundraising baby bottles. We also could write letters to our senators and representatives especially with the Freedom of Choice Act coming up. I know you feel passionate about stopping it and every voice counts. We also could also participate in the bishopsâ€™ postcard campaign against FOCA and pass out postcards at our youth group meetings. Iâ€™m so glad you want to work to stop abortion. We can make a difference, Elena! Love, Theresa P.S. Iâ€™ll end with one of my favorite Bible verses: â€œLet no one despise your youth, but set the believers an example in speech and conduct, love, in faith, in purity.â€ 1 Timothy 4:12 P.S.S. Hereâ€™s another good one: â€œThat you may be blameless and innocent, children of God without blemish in the midst of a crooked and perverse generation, among whom you shine as lights in the world.â€ Philippians 2:15