Working for a pro-life activist organization, I’ve come to realize that hate mail is one of the things that comes with the territory. As nasty as hate mail can be, there’s something about it that tells me we must be doing something right. After all, if those who want to keep abortion legal weren’t concerned that pro-life activism really is effective, they wouldn’t go to the trouble of contacting us. Instead, they would simply ignore us. But they don’t, and for the past several years, we’ve continually received a steady stream of hate mail. Case in point — this e-mail we received earlier this week:

From: Heywood Jablowme [mailto:[email protected]] Sent: Wednesday, August 09, 2006 8:05 PM To: Pro-Life Action League Subject: Message to the Pro-Life Action League [Message from Heywood Jablowme ([email protected])] YOU are completely despicable. In the name of “truth” you distort the truth by blowing up the photos you have many many times larger than real life. Your real agenda is to control women, deny them their constitutional rights and make them vessels to carry out your warped agenda. Too bad YOU weren’t aborted. The world would be a much better place. Why not worry about the people who are BORN instead of imposing your religious beliefs on people? How many children have YOU adopted? And Have YOU ever had the wrenching decision to possibly give birth to and have to care for a severely disabled child? YOU and organization are slime. And if there WERE a hell, you’d burn in it. Heywood Jablowme

This e-mail prompted me to think two things.

Here’s another hate e-mail we received a few days after we announced our upcoming Contraception Is Not the Answer conference:

From: Jody [mailto:[email protected]] Sent: Friday, July 28, 2006 2:30 PM To: Pro-Life Action League Subject: Message to the Pro-Life Action League [Message from Jody ([email protected])] Your site is completely disgusting. You guys are severely unhinged. I can not express enough how much I am disgusted by you people. Birth control is bad? But sexism is okay? You f***ing morons. Go get bent Jody

All the more reason that it is absolutely necessary for us to roll up our sleeves and tackle the issue of contraception head on. Which leads me to the second part of this post’s title. Last month I found on this on Mark Shea’s blog: 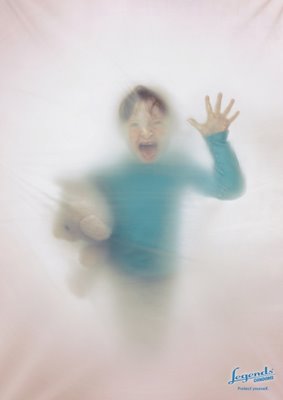 It’s an ad for Legends condoms. According to The Curt Jester, it recently won an advertising award at Cannes. This blog has the details of the award (along with two other similar and equally disgusting ads):

Mark’s one-sentence commentary on the ads:

Show me a culture that despises virginity…and I’ll show you a culture hates (and I mean hates) children.

Zippy Catholic throws in his $.02:

Children screaming, suffocating in latex bags, seen as a good thing. Protect yourself from the vile little parasites while having your fun. The gloves of the Powers and Principalities are starting to come off. Choose your side.

The line has been drawn in the cultural sand.