Use spray chalk to spread the pro-life message

Spray chalk is a relatively new product that provides a great opportunity to enhance your pro-life activism with messages that can be sprayed directly on a sidewalk. You can find it at major retailers like Amazon.com.

Using a stencil and this temporary material, you can mark the ground with a message that supports your protest and expands its impact. Here’s what’s involved:

When to use spray chalk 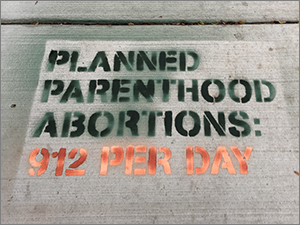 The Pro-Life Action League, began using spray chalk at an October 2019 “Trivia Night” fundraiser for Planned Parenthood at a brew pub in Chicago, using stenciled messages like “PLANNED PARENTHOOD ABORTIONS: 912 PER DAY.” Every guest arriving for the event had to walk right past — or step right through — our pro-life message.

Spray chalk proved to be such an effective addition to our protest toolbox that we’ve continued to use it at similar events, such as at a comedy roast fundraiser for a pro-abortion lobbying group, with the message, “ABORTION IS NOT FUNNY.”

You could also use spray chalk on its own, as a way to break through the public’s reluctance to think about abortion. An ideal slogan for such a project would be “Abortion takes a human life.”

We’ve also found spray chalk useful in other ways. For example, for a protest during the COVID-19 pandemic, we used spray chalk to mark out where volunteers should stand with their signs in order to maintain social distancing.

Cutting out your stencil While you can use spray chalk on its own to write out messages, the end product is likely to be sloppy. We strongly recommend using a stencil. Not only does this make your message more legible, it gives the impression of a group that is both well organized and determined.

For the lettering, you can draw out your own stencil-style outlines for each letter. But we’ve found it easier to use a word processor like Microsoft Word or a layout and design program with a stencil font like Stencilia (available for free here), printed plain white paper on a large-format printer at a local print shop like FedEx Office. These prints only cost a few dollars.

Now you have a stencil that can be laid on the ground to spray the chalk over.

Applying spray chalk on the sidewalk

If you’re using your spray chalk message as part of a protest or rally, leave enough time to spray out your message before the event begins. You’ll need more time the first time you use this tool. Wear clothes that you won’t mind getting some spray chalk on. 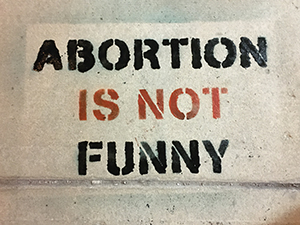 To use the spray chalk, simply hold the can upright about 6 inches from the ground and spray. It may take several passes to fully fill in the letters. You may wish to use two different colors of chalk to make your sign “pop” a little more. If you do, use one color per line. Be sure to choose locations where your target audience will be walking.

Once you’ve sprayed in the stencil, carefully remove the stencil from the ground, ensuring that you don’t drip any excess on your design. When first sprayed, this material is quite wet (just like spray paint). Your first attempts might look a bit sloppy, but soon you’ll get the hang of it.

We recommend spraying at least two stencils in each direction that your target audience is likely to be coming from. For example, at our Planned Parenthood “Trivia Night” protest, we sprayed three or four stencils on the sidewalks both north and south of the brew pub entrance, as well as a couple on the sidewalk across the street, to reach attendees being dropped off there.

If you’re doing spray chalk as a stand-alone messaging activity, you’ll again want to spray your message several times to have the biggest impact.

If confronted by police or business owners, simply inform them that the spray can be removed with hot water and a mop. Or if left alone, it will quickly wash away with rain exposure to sunlight.

When we first used spray chalk in October 2019, at first the Chicago Police objected, thinking we were using spray paint. When we informed them our material was just chalk that would wash away, they let us proceed.

Though it shouldn’t be, in some municipalities chalking the sidewalks (with spray chalk or regular chalk) is considered a form of vandalism. In other places, the laws on the books aren’t clear about this kind of temporary messaging. That said, you should be confident in your First Amendment right to use this form of public expression. However, if police threaten to issue you a citation or arrest you if you chalk the sidewalk, we advise you to comply and then contact us to determine if your rights have been violated and further steps can be taken.

See also “Working with police at your pro-life event”.

Let us know about your pro-life chalking!

We’d love to know how you’re using this creative pro-life tool! Send us pictures of your spray chalked pro-life messages, and let us know what impact they had.