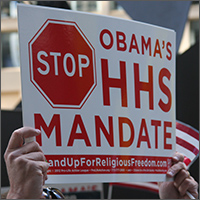 Today the U.S. Supreme Court agreed to hear a challenge to the HHS Mandate brought by seven plaintiffs, most notably the Little Sisters of the Poor.

Churches and houses of worship are currently exempt from the mandate, but this is not the case for religious non-profit institutions. If groups like the Little Sisters do not want to provide contraception, sterilization, and abortion-inducing drugs to their employees, the Obama Administration offers an “accommodation” under which institutions are required to fill out a fhttp://standupforreligiousfreedom.com/orm noting their objection, which then shifts the coverage obligation to their insurance companies.

Supporters of religious freedom have rightly characterized this so-called accommodation as a “sham” because it still requires religious non-profits like the Little Sisters of the Poor to cooperate in a process that results in coverage of contraception for their employee health plans. As the Little Sisters’ brief to the Supreme Court said:

Oral arguments are expected to heard in late March.

[Cross-posted at Stand Up for Religious Freedom]