It is often hard to gauge the response to the Pro-Life Action League’s Face the Truth displays. Shouts from car windows are usually unintelligible, thumbs ups at 50 miles per hour can be mistaken for middle fingers, and car horns communicate anything from the heartiest support to the most resolute dissent (or occasionally nothing more than an unrelated traffic squabble).

Rockford, IL is perhaps one of the most enigmatic cities in this regard. I noticed more positive than negative reactions on our annual Face the Truth day in Rockford last Tuesday, but I spoke to several volunteers who reported the opposite, and still others who seemed to receive equal levels of each.

One interpretation of this incongruity is that each volunteer may actually be observing different reactions — the response of a driver at the very beginning of the display may vary greatly from that of the driver at the end, who has had more time to process the images and form a concrete position.

Another Interpretation of Mixed Reactions

There is another interpretation, however, that may better account for this phenomenon. We received unusually mixed reactions to our display this year because, now, more than ever, our nation is having mixed reactions to abortion. It has now been a little over a month since the first undercover video revealing Planned Parenthood’s illegal profiteering of fetal parts was made public, and the resulting social media storm has forced much of the nation to step back and reconsider abortion.

The videos do this so effectively by exposing the callous manner in which these executives and abortion doctors handle dismembered unborn children, or the “products of conception.” It is truly shocking to hear employees rattling off prices as the undercover David Daleiden (posing as a potential client) picks up a near fully-formed arm from an open dish with a tweezers to show to the hidden camera. The video serves to unmask Planned Parenthood’s illegal activities and the horror of abortion at the same time. This is precisely why, at the third site in Rockford, we mounted the banner from the League’s recent nationwide protest of Planned Parenthood, which drew roughly 68,000 protesters in over 350 cities. Daleiden used the momentum of the exposé to highlight the grotesqueness of abortion, so we did the same.

We were reminding people that, as hard as you try to ignore abortion, you cannot ignore the fact that the largest abortion provider in the nation is on its way out.

See Some More Photos from Rockford’s Face the Truth Day 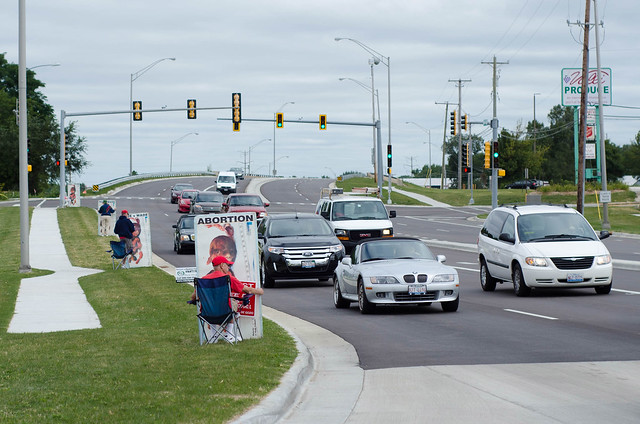