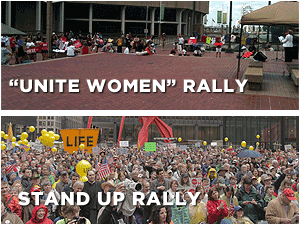 On Saturday, rallies were held to “Unite Against the War on Women”, a pretty obvious response to the Stand Up for Religious Freedom Rally campaign spearheaded by the Pro-Life Action League and Citizens for a Pro-Life Society.

As the picture indicates, the response was paltry. Even in New York City, where thousands gathered on March 23 in defense of religious freedom, only a few hundred showed up to protest.

They may have had a few B-list celebrity speakers, but they were pitching their muddled message to largely empty audiences. Outside of some talk about the so-called “war on women”, their message was as scattered as could be.

Unite Women for What?

With such an unclear message, it’s hardly surprising that the media largely ignored the event—even with the National Organization for Women’s PR juggernaut behind the events. Most of the coverage they received was from “women’s health” related websites and even there it was scarce. Google News search results don’t go past one page!

Unite Women a Sharp Contrast to Stand Up Rally

The disorganization of this effort as evidenced in their shoddy messaging, poor attendance and lackluster media coverage is a sharp counterpoint to the Stand Up Rally effort.

To say nothing of the messages on their signs, most of which are too vulgar to publish here. The Stand Up Rallies were designed from the outset to welcome participation from families, children and young people. I can only imagine how parents or folks from times with more decorum would feel at one of the Unite Women Rallies.

All of this shows exactly what League National Director Joe Scheidler has been saying for years: They might have the money and the political clout, but the other side just doesn’t have the grassroots.

A Beautiful Day To Yell at the Government

Martha Plimpton, TV actress of limited renown, summed the situation up nicely when she tweeted after attending the New York rally that it was, ” . . . a beautiful day to yell at the government.” And that seems to be precisely what was accomplished on Saturday: sound and fury, signifying nothing.

But while their event has sputtered out, the Stand Up effort has just begun. Mark your calendar for the June 8 Rally and bring your friends, bring your neighbors, bring your parish, bring your school.

Check here for a Rally near you, and if you don’t see one, consider signing on to become the Rally Captain in your town. The National Rally team will be there every step of the way to make sure your event is a success.