September 14 will always hold a special place in the hearts of both my wife, Jocelyn, and me. On this day, 8 years ago, we had our first save. (For those of you unfamiliar with sidewalk counseling, a “save” happens when a mother, just steps away from entering a clinic where she has an abortion scheduled, decides instead to choose life for her baby.) 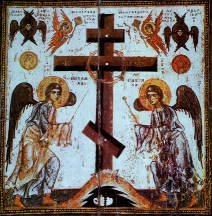 This was an especially fitting date for this manifestation of God’s infinite goodness, as September 14 is the feast of the Triumph of the Cross. For several months, Jocelyn and I had gone on Saturday mornings to stand outside of an abortion clinic on Chicago’s northwest side to join others in prayer for the abortion-bound mothers, and for the sidewalk counselors who speak to them to warn them of the dangers abortion poses to them personally. On this particular day, we had just finished praying the rosary, and were about to head home. Just then, one of the veteran sidewalk counselors spoke a few words to an abortion-bound mom who had just arrived with another woman, and hastily called for Jocelyn and me to come over. Both women spoke only Spanish. The sidewalk counselor knew only a few Spanish words, but knew that Jocelyn and I spoke more than she did. (Neither of us is fluent, to be sure, but I speak it better than I understand it, and Jocelyn understands it better than she speaks it, so between the two of us, we can communicate with someone who speaks only Spanish fairly well.) I don’t remember what I said to this woman — her name was Blasa — but it was clear that she did not want to have an abortion. All I remember is that we told her the abortion clinic was dangerous, and we told her there was a place she could go where she could get real help (a pregnancy resource center just around the corner). Just steps away from the abortion clinic entrance, it took less than a minute for Blasa to decide that she was going to keep her baby. We then offered to take her to the PRC. At that point, Blasa’s friend, who had brought her to the clinic, made no attempt to persuade her otherwise, but told her she had to leave. Blasa looked at us somewhat worriedly, and we assured her that we would be able to give her a ride home. We were able to get in right away at the PRC, and at that point, we expected that they would be able to take it from there, and we could sit in the waiting room until she was able to speak with a counselor about the services and assistance the PRC offered. But then we found out that the center’s Spanish speaking counselor was running late, and wouldn’t be in for another hour. That left my wife and me to serve as translators between Blasa and the counselor. I’m convinced that that day the Holy Spirit gave us — and Jocelyn especially, as she did most of the talking — a modified form of the gift of tongues, as we were there for at least an hour, hearing and using words we never knew we knew. As I mentioned, it was clear from the moment we first spoke with Blasa, she didn’t want an abortion. In Blasa’s case, she scheduled an abortion because she was scared, and because she had been lied to. Blasa was an undocumented immigrant who had come to the U.S. from Mexico about five years prior. When she found out she was pregnant, she couldn’t remember the name of the place she called, but whatever it was referred her to the abortion facility where we ended up meeting her. Along the way, she had been told — over the phone — that there might be “something wrong with the baby”. She was also told that she should make an appointment for an abortion as soon as possible, because if the baby was born in a hospital, the hospital would find out she was here illegally, and she would be deported. We told her that this was not true, and that no hospital would do this — an assurance that brought her visible relief. We also told her that it would have been impossible for anyone to know at that point if there was anything “wrong” with her baby — a diagnosis, I repeat, that had been made over the phone. And although she was determined to keep her baby regardless, she wanted to know if her baby was healthy. So we called a nearby medical office that performs ultrasounds, and made an appointment for her half an hour later. We drove her to the appointment, at which Blasa looked, with tears in her eyes, at pictures of her beautiful, healthy baby. We then gave Blasa a ride home, and left her our phone number in case she ever needed anything. She was overflowing with gratitude. And all three of us were overflowing with joy.