The Report Card On the Morning-After Pill Is In 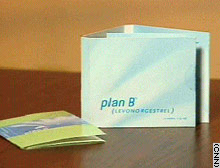 And its grade is a big fat F:

Journal reports that no study found a decrease in pregnancy or abortion rates, even with increased use

WASHINGTON, Jan. 5 /Christian Newswire/ — Well-known advocates for the morning-after pill have admitted that “increased access to emergency contraception pills enhance use but has not been shown to reduce unintended pregnancy rates” in a meta-analysis of studies conducted in 10 countries published this month in the Journal of Obstetrics & Gynecology. They also state the drug’s effectiveness may be “substantially â€¦ overstated.” “The same researchers who demanded the morning-after pill become non-prescription now admit that making the drug easy to get does not live up to their promises of reducing pregnancies and abortions. Due to intense pressure from them and other abortion advocates, the Food and Drug Administration (FDA) caved and made it non-prescription to buyers over 18, denying women the medical counseling and testing that they need before taking this drug,” stated Wendy Wright, President of Concerned Women for America (CWA). Authors Elizabeth Raymond and James Trussell state that “no study found an effect on pregnancy or abortion rates.” Access to the morning-after pill “is unlikely to produce a major reduction in unintended pregnancy rates no matter how often women use it” and “previous expectations that improved access could produce a direct, substantial impact on a population level may have been overly optimistic.” They also question the morning-after pill’s effectiveness, noting that “the published efficacy figures calculated from currently available data on this regimen â€¦ may overstate actual efficacy, possibly quite substantially. Clearly, if the method is only weakly efficacious, it is unlikely to produce a major reduction in unintended pregnancy rates no matter how often women use it.” In 2002, Elizabeth Raymond stated, “Easier access to and wider use of emergency contraception could dramatically lower the high rates of unintended pregnancy and induced abortion in the United States.” James Trussell stated in 1998, “We decided that making emergency contraception widely available was the most important step we could take in the United States to reduce the incidence of unintended pregnancies.” For years he harshly criticized the Bush Administration and the FDA for “allowing politics to trump science.” “Now we will see if ideology and abortion politics will trump science. Advocates should drop their demands for easy access to the ineffective morning-after pill since the science proves their claims to be wrong,” said Wendy Wright. “The authors mislead readers regarding sexually-transmitted diseases (STD). The studies they relied on, which claim that the morning-after pill does not impact STDs, included only women who were sexually active. None of their studies considered the impact of whether access to the morning-after pill encouraged women and girls to begin having sex,” noted Wendy Wright.

I won’t hold my breath to wait to hear what any of the makers of the morning-after pill have to say about this. They’re probably too busy counting their profits to take the time to issue a comment.