This Week in Review 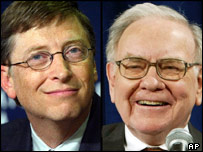 This last week of the last month of the first half of 2006 has been an eventful one. Here are some highlights: One really, really rich guy gave a lot of money to an even richer guy, and a lot of it will be used to fund abortion and contraception. Father Tom Euteneuer’s commentary on this windfall for the culture of death is spot-on, as usual. Here’s a taste:

There is nothing that fuels the anti-life movement more than money. It exists, perhaps symbolically so, on filthy lucre, and with this one mammoth financial windfall I believe the abortion-promoting elite have pushed the already-imbalanced life vs. death battle beyond the point of no-return. With Buffettâ€™s billions Gates may be, in a strictly worldly sense, unstoppable. The culture of life simply cannot compete with this kind of money. And this is precisely the point where the pro-life movement has needed to be for a long time: the point where all strictly human solutions are rendered impotent and we have no choice but to turn to an even greater power than the combined fortunes of the worldâ€™s two richest men. Simply put, they have money, we have God; which means we live in hope for the definitive solution to this mess and they live in fear of a stock market crash.

Operation Rescue learned in late April that Central Womenâ€™s Services had not been able to pay its rent in months, and that the property was for sale. OR acted quickly to make an offer on the building through a third party, and specifically requested that the current tenant not be retained. That stipulation was placed into the real estate contract. It was later learned that Central Womenâ€™s Services had come up with the back rent after the building had entered escrow, and asked to continue their rental agreement under the new owner. However, because the property was under contract, the abortion mill was instead forced to close. â€œWe have no doubt that if we had not moved quickly to buy that building, this abortion mill would still be in operation today,â€ said Troy Newman, President of Operation Rescue.

Vital Signs Blog reports that the only abortion clinic in Omaha, NE, is now closed, too:

Vital Signs Ministries has organized and led a prayer and sidewalk counseling team that has protested abortions six days every week for nearly 25 years at this location. Hundreds of lives have been saved and countless miracles have been performed by the loving power of God through these faithful pro-life activists. Naturally, we are pleased beyond description at this development.

A Catholic priest from Kansas City who donated his adult stem cells to save a Kentucky woman’s life surprised her at a local pro-life event by showing up to offer his encouragement and support. Lee Ann Collins, a mother of two from Kentucky, had no idea Father Ken Riley would fly to the event to greet her… During the rally, a local pro-life leader presented the story of her donation and Collins was told to come to the stage to present an award in Father Riley’s honor, and she indicated she hoped she would be able to meet her donor someday. Then, Father Riley came to the front of the stage as the audience cheered. “I was so surprised, I had no idea they planned this,” Collins told the Catholic newspaper. “What can you say, what words can you say to someone who saved your life?”

And, news of some great plans by Students for Life of America –the group whose college-based curriculum largely served as the inspiration for us to produce our own pro-life curriculum for high school students: