For us Americans, this coming Monday, May 29th, is Memorial Day, a day when we pay special tribute to the brave men and women who have given their lives in service to our country. May 29th is also the birthday of G. K. Chesterton. “Who is G. K. Chesterton?” you may ask. This excerpt from the American Chesterton Society’s website — titled, fittingly enough, “Who is this guy and why haven’t I heard of him?” is as good of an introduction as you’ll find:

Gilbert Keith Chesterton (1874-1936) cannot be summed up in one sentence. Nor in one paragraph. In fact, in spite of the fine biographies that have been written of him, he has never been captured between the covers of one book. But rather than waiting to separate the goats from the sheep, letâ€™s just come right out and say it: G.K. Chesterton was the best writer of the 20th century. He said something about everything and he said it better than anybody else. But he was no mere wordsmith. He was very good at expressing himself, but more importantly, he had something very good to express. The reason he was the greatest writer of the 20th century was because he was also the greatest thinker of the 20th century.

If you’ve never read anything written by Chesterton, I envy you. 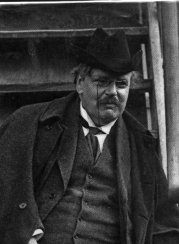 I say these words because they are the same ones Chesterton spoke to a young boy in a London train station some 100 years ago when, in the course of their converesation, the boy said that he had never read anything by Charles Dickens. Chesterton went on to tell the boy that he envied him because of the sheer joy he would experience upon reading Dickens for the first time. Chesterton’s wit, the clarity of his thought, and the diversity of his literary output–he wrote everything from novels to biographies, poetry to plays, studies of history to detective stories–all contributed to his unparalleled status as a writer. Chesterton railed against many of the evils that plagued the world then, and plague the world even more so today, including sexual immorality, birth control, moral relativism, socialism, and unchecked capitalism. We all could learn much by reading him, and enjoy ourselves in the process. The following quotations should whet your appetite:

“What embitters the world is not excess of criticism, but an absence of self-criticism.” – Sidelights on New London and Newer New York “Among the rich you will never find a really generous man even by accident. They may give their money away, but they will never give themselves away; they are egotistic, secretive, dry as old bones. To be smart enough to get all that money you must be dull enough to want it.” – A Miscellany of Men “I believe what really happens in history is this: the old man is always wrong; and the young people are always wrong about what is wrong with him. The practical form it takes is this: that, while the old man may stand by some stupid custom, the young man always attacks it with some theory that turns out to be equally stupid.” – Illustrated London News, 3 June 1922 “The reformer is always right about what is wrong. He is generally wrong about what is right.” – ILN 28 October 1922 “Do not look at the faces in the illustrated papers. Look at the faces in the street.” – ILN, 16 November 1907 “Tradition means giving votes to the most obscure of all classes, our ancestors. It is the democracy of the dead. Tradition refuses to submit to that arrogant oligarchy who merely happen to be walking around.” – Orthodoxy, 1908 “I still hold. . . that the suburbs ought to be either glorified by romance and religion or else destroyed by fire from heaven, or even by firebrands from the earth.” – The Coloured Lands “How quickly revolutions grow old; and, worse still, respectable.” – The Listener, 6 March 1935 “He is a very shallow critic who cannot see an eternal rebel in the heart of a conservative.” – Varied Types “It is terrible to contemplete how few politicians are hanged.” – The Cleveland Press, 1 March 1921 “It is true that I am of an older fashion; much that I love has been destroyed or sent into exile.” – The Judgement of Dr. Johnson, Act III “Love means loving the unlovable – or it is no virtue at all.” – Heretics, 1905 “Women are the only realists; their whole object in life is to pit their realism against the extravagant, excessive, and occasionally drunken idealism of men.” – A Handful of Authors “The Bible tells us to love our neighbors, and also to love our enemies; probably because they are generally the same people.” – ILN, 16 July 1910 “Modern broad-mindedness benefits the rich; and benefits nobody else.” – “The Church of the Servile State”, A Utopia of Usurers “Too much capitalism does not mean too many capitalists, but too few capitalists.” – The Uses of Diversity, 1921 “Our materialistic masters could, and probably will, put Birth Control into an immediate practical programme while we are all discussing the dreadful danger of somebody else putting it into a distant Utopia.” –GK’s Weekly, 17 January 1931 “Atheism is indeed the most daring of all dogmas . . . for it is the assertion of a universal negative.” – “Charles II”, Twelve Types “No sceptical philosopher can ask any questions that may not equally be asked by a tired child on a hot afternoon.” – George Bernard Shaw “The Christian ideal has not been tried and found wanting; it has been found difficult and left untried.” – What’s Wrong With The World, 1910

More quotations can be found here.